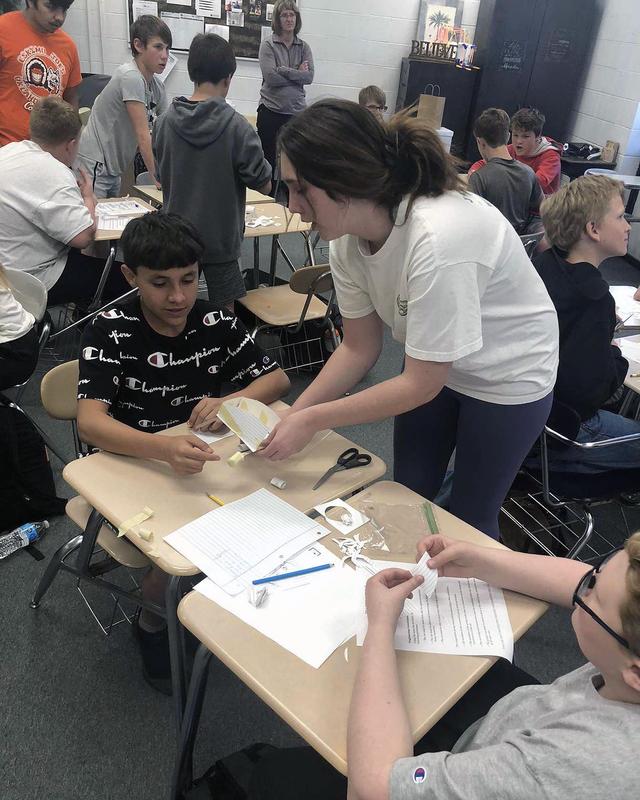 The team contacted Meeker Middle School STEAM teacher, Susan Miller, to discuss possible activities for her students. The group decided to make three kits that each focused on different branches of engineering. Each kit included guides for teachers and students, along with all of the supplies needed for 20 small groups to complete the project.

The project that the American Spirit team did with the students was called The Indy Car. The goal of this was for the students to make a car out of notecards, tape and straws. Each group's car had to roll down an inclined plane, and the car that rolled the furthest distance from the bottom on the incline won the challenge.

Each group was given a blank piece of paper and a paper with the Engineering Process on it. The students were then asked to sketch a design of what they wanted their car to look like. After the students had their designs they were given the materials and 15 minutes to make their first design.

When the time was up each group tested their Indy Car on the ramp and distances were recorded. An additional 10 minutes was given for the students to redesign or make improvements on their original car.

“This was special to me because I wish that I would have gotten this experience in middle school,” SkillsUSA member Junior Carney said.

The American Spirit team is composed of SkillsUSA members in the Pre-Engineering Academy. The team must carry out three projects each year and then present those projects at the SkillsUSA State Leadership and Skills Contest. The three projects must be focused on community service, citizenship and promotion of career and technical education. Current members of the American Spirit team are Kiya Crowder, Madison Conley, Mary Beth Frerichs, Junior Carney, David Nunez, Hayden Ruyle, Darick Carney and Cayde Kerensky.

The American Spirit team will be presenting this project at the SkillsUSA National Leadership & Skills Conference in Atlanta on June 20-24.