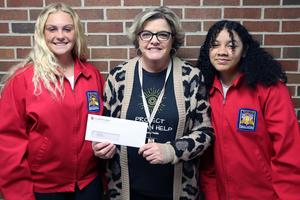 Earlier this semester, the American Spirit team worked to raise money and awareness of Retinoblastoma with Mrs. Brinlee and Project Eye Can Help. The students learned that this type of eye cancer starts in the back of the eye and most often affects young children less than two-years old.

The team decided to make this cause a focus of their community service project.  Mrs. Brinlee provided the students with a list of items needed to make care packages for Project Eye Can Help. Students did multiple fundraisers for the purchase of items needed and were able to donate $300 to the organization.

Students also helped raise awareness of Retinoblastoma by making a sleeve to wrap around individual packages of popcorn. In coordination with SkillsUSA’s “We CARE. Wednesday” activities, the team members wrapped over 300 packages of popcorn and distributed them to students throughout GCTC’s main campus in Shawnee.

"This project is special to us since we know a young girl who is impacted by this disease,” SkillsUSA advisor Sue Ellen Frerichs said. “The students are passionate about this cause and have worked diligently to raise money and promote this campaign."

The American Spirit team is composed of SkillsUSA members in the Pre Engineering Academy. The team must carry out three projects each year and then present those projects at the SkillsUSA State Leadership and Skills Contest. The three projects must be focused on community service, citizenship and promotion of career and technical education. Current members of the American Spirit team are Kiya Crowder, Madison Conley, Mary Beth Frerichs, Junior Carney, David Nunez, Hayden Ruyle, Darick Carney and Cayde Kerensky.

The team will be presenting this project at their contest in Tulsa, Okla., on May 24.